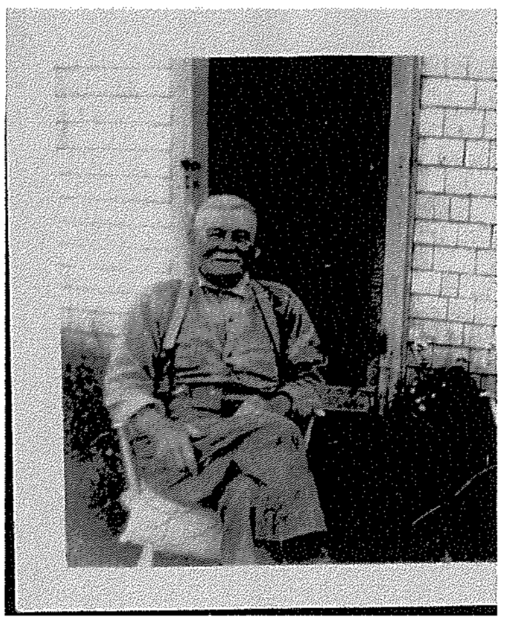 It would probably surprise many residents of New Glasgow to know that there is very rare and valuable chair that originated in New Glasgow in the 1800’s. It is a Windsor style chair that has a very narrow seat which has led to the chair sometimes being called the “Half Assed Chair”.

My father, Ralph Dickieson, has been a collector and amateur historian for most of his life. In the 1980’s he was able to acquire one of these chairs from Wallace Nisbet who owned the farm behind where Joe and Betty Cameron now live. Dad has since given the chair to me.

My father spoke to Wallace and various other people in the community to try and find out more about the chair. The following is an article that my father wrote back in the 1990’s with a few editing changes made by myself.

The New Glasgow Chair is one of the rarest pieces of furniture that was made on PEI. I am not sure where the name came from. A friend of mine, Arthur Clark, a dealer in high quality antiques from Summerside, takes credit for the name. He told me he had purchased four of this type of chair at an estate auction of John Semple in New Glasgow. (John Semple lived near where Chris and Melanie Taylor live now.) Mr. Clark found the chairs most interesting because he had never seen any other chairs of a similar make or design. He did a lot of research throughout the Maritimes and the rest of Canada. He wasn’t able to find any chair like what he had purchased at New Glasgow. He then had the chair illustrated and listed in Unitt’s Canadian Antique Price Guide as the “New Glasgow Chair”, which to my knowledge has never been disputed.

After Mr. Clark telling me of his experience and the work he did researching the chair, I became interested in the story of the New Glasgow Chair. This is the information that I have been able to find since that time.

It would appear that there was a small number of chairs made, possibly only twelve and they all originated from the Semple homestead. I believe they were made by a young Irish immigrant who worked on the Semple farm and had been a furniture apprentice in Ireland. I believe his name was Mr. _____ Rattery. The story is that while working on the Semple farm he made the chairs in his spare time to earn some extra money. I have been able to trace some of the other chairs to three other families in the New Glasgow area, the Nisbets, the Bulmans and the Stevensons. The Nisbet family had four. Wallace told me that one was given to a Mr. Brad LePage was he was canvassing for the Liberals in the 2nd District of Queens. I understand this was one was later donated the Government House. The second one is in a private home in New Glasgow and is very much treasured and enjoyed by its owner. I was able to purchase the third one from Wallace in May, 1981. The one he had left was broken and I don’t know what happened to it after Wallace sold the homestead. I spoke to some of Wallace’s family and the present owner of his home and they do not recall seeing any parts of the chair when cleaning out the house.

I suspect that the Bulman Family had four as well. I was told by John Doyle who worked for Chester (Bulman) for many years that Dr. Gill Houston got one or two from Chester in the late 1940s or early 1950. The one that Hilda “Buff” and A.B. “Bonnie” LePage donated to the Heritge Foundation in 1993 may have come from the Bulman home. Mrs. LePage told me they purchased it from a Mr. Jerry Peters from Mayfield many years ago. She also advised that Stewart family in Cavendish had one as well. She said that Fenner (Stewart) had sat in it for many years. She believed that Mrs. Stewart had given it to a friend of hers. I checked with the friend who advised she had sold it to a Mrs. Simpson from Cavendish. Mrs. LePage also told me that someone from New York who had stayed at their Inn in Cavendish had also purchased one for $5.00. This may well have been the fourth chair from the Bulman household.

I believe the Stevenson household had three of the chairs. Anna (Stevenson) tells me that as long as she can remember there were only three. If there was a fourth, she doesn’t know where it would be. Anna, who is in her 87 year has an excellent memory and is a th great source of information. If there had been a fourth chair, she would likely have known about it. She has taken great care of these chairs over the years.

I was told that the Watson Semple home had one of these chairs as well. This may be as the two Semples were brothers and lived on adjoining farms.There are many unanswered questions: a) When exactly were the chairs made; b) Where are the chairs Mr. Clark purchased; c) Did the LePage chair come from the Bulman Homestead; d) Date of the John Semple sale; e) Was “Rattery” actually the name of the maker;

picture of chair and john semple 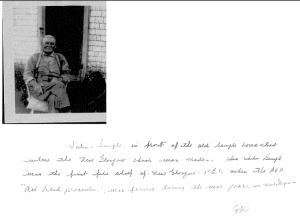