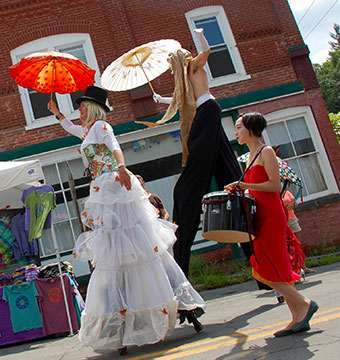 You may have read a recent online CBC news article regarding approved Federal funds for upcoming event that will be happening this summer here on the banks of our beautiful River Clyde. But if you haven’t, here is alittle information that might interest you.

The River Clyde Pageant is an outdoor, community-engaged theatre production taking place along the banks of the River Clyde in New Glasgow, PEI in late July 2016. This traveling spectacle will feature stilt performers, large-scale puppets and a choir, and is inspired by the history, mythology and contemporary environmental issues associated with PEI rivers and waterways.

The River Clyde Pageant was conceived by Ker Wells and Megan Stewart, two Island theatre artists who have been involved in similar community-based projects on PEI . Emily Wells, chef and owner of The Mill in New Glasgow, is the local liaison and organizer of the community supper that will conclude the Pageant performances.

They are seeking performers and volunteers from communities across the Island to collaborate on the making of the Pageant. They are welcoming anyone who wants to be involved – all ages, abilities and levels of experience. You don’t need to be a ‘performer’ or ‘artist’ by any traditional definition, but if you have an interest in building puppets and lanterns, singing in a choir, stilt-walking, playing a character, or if you are concerned about the health of Island waterways, then we have a place for you in next summer’s Pageant. Volunteers, set builders and costume makers are also needed.

Ker and Megan will direct the Pageant, with specific group leaders directing components such as puppets, stilts, and music. Rehearsals will begin mid-June 2016 and will continue throughout the month, ramping up during the final two weeks before the performances on July 30-31. There will also be workshops in New Glasgow and Charlottetown for puppet and lantern building and stilt walking. Rehearsals will occur on weekends and weekday evenings, and are flexible for various levels of commitment.

If you have questions or if you’d like to learn more about the Pageant and how you can be involved, email riverclydepageant@gmail.com.